The sun had slipped through the pines on the Yarimadasi headland and what was left of the day fluttered like a silk sheet over Gocek bay. I’d spent the last hour as an eight-year-old: kayaking, swimming, snorkelling and high-diving from the deck of the Amazon Solo, a 28m, Black Sea-built gulet. Now I was drinking grown-up gin with the owner, Serhan Cengiz, while the chef gutted a grouper for dinner.

I was at the bitter end of a ten-day journey down the Turquoise Coast, a trip on which every day had been more beautiful than the last and on which the wonders had been stacked like an increasingly unfeasible house of cards.

I’d picked up Roman pottery shards; seen a stone thrown by God; skimmed across water so clear it felt like flying; hiked ancient paths through resinous forests; waded icy rivers in 35C sunshine; and found peace I’d thought impossible in a post-lockdown world. Getting drunk on such beauty had left me confused. Turkey’s Safe Tourism certification scheme was world-leading; its welcome effusive; its cuisine, like its history, complex and classical; and its landscapes suffused with cinematic grandeur. Why then, I teased Serhan, did Greece get all the love? He said he’d think about it.

Turkey’s Turquoise Coast runs from Cesme in the north to Alanya in the south. If you followed every turn of the shore, explored every bay and set foot on each of the 500-odd beaches, you’d travel 1,000 miles.

I started in Bodrum, the party town stifled by Turkey’s strict social-distancing laws; mostly stifled, anyway. Dining with my guide, Taylan Tasbasi, at Iki Sandal, where the Ottoman meze is a history book of 15th-century appetisers, 17th-century fish pickles and 19th-century salads, I heard of two speakeasies on the edge of town: an underground club called Pandemic and a chill-out bar called Quarantine. Both stood in marked contrast to the obedience with which the city was following the new public health regime, bringing a Sunday morning feeling to a place where it always used to be Saturday night.

We took the ferry across the inky Gulf of Gokova to the Datca peninsula (£6 foot passengers, £1 extra for bikes, £18 for cars; bodrumferryboat.com). It seemed a stark, sun-blasted place — the austere opposite of hedonistic Bodrum — but there was treasure here.

I had a cup of tea and a haircut in Hizirsah. Ali, the barber, had come straight from his almond groves and was talking about the 8,825ft peak behind the village, on which there was an ancient stone shelter. Legend had it, he said, that women brave enough to spend the night alone up there would see their future. Do they? I asked, as he set fire to my ears. “I think they foresee only a long walk back down,” he said.

Right now Datca feels like the 1960s, but land is being bought and the increasing number of Istanbul number plates confirms rumours that this 50-mile-long strip of mountain and orchard is the next big thing in off-grid Turkish tourism. It isn’t the first time it has hosted immigrants. At the western tip lies Knidos, a port city founded in the 7th century BC with two harbours, multiple theatres and a naked Aphrodite so racy that it was put under guard to deter lascivious sailors.

Taylan is an archaeologist and, unlike me, unfazed by the riches underfoot. He picked up three pottery fragments: one black, one red and one with a spiral. “Roman, lead-glazed, 2nd century,” he said, “and Greek, 1st century BC. The one with the spiral is Lycian and much older.” He dropped them and wandered off. I followed, astonished.

Knidos was home to a Dionysus cult — ancient ravers who used booze and dope to party like it was AD99. Their temple is in ruins now, but there’s another one, two hours east. You may recognise the name from the last-minute discount cards in the travel agency windows. It’s called Marmaris.

With its full-English caffs, lager- marinated steak dinners and pile ’em high all-inclusives, it’s easy to dismiss Marmaris as Benidorm à la Turque. Indeed, as you gape at the vodka-befuddled British twerkers in the Anfield Bar and the overenthusiastic talent at Big Tiffany’s drag joint, you may feel that the Spanish sink resort is the more sophisticated option. But just a short drive from the strip lie some of Europe’s prettiest seaside hideaways.

Selimiye is one. You pass Jesus Beach on the way — so named because the shallow bay makes paddlers appear to walk on water — the road switchbacking around a temptation of impossibly blue fjord-like inlets. This floral fishing village, where waterside rooms at the Bahtiyar Pansiyon are still at backpacker prices (B&B doubles from £40; selimiyebahtiyarpansiyon.com), is like Mykonos must have been before it became trendy. If you want to splash out, try the Tamara hotel in the heart of the village, with rooms 20 paces from the water (B&B doubles from £120; tamaraselimiye.com), and spend a few days doing what the Turks do: floating, eating, dancing and taking selfies. But go soon because gentrification is coming.

Over the mountain and through the shipyards, where the carcasses of half-built gulets lie like dinosaur skeletons among the wildflowers, is Bozburun. There are many reasons for visiting, but I offer just two: first, the smoked organic goat’s milk ice cream at Bozburun Dondurmacisi (40p a scoop). Second, a boutique hotel accessible only by boat called Sabrina’s Haus.

Sabrina Zimber was a German wanderer who dropped anchor in the bay in 1984, saw her seaside field of dreams and built a B&B for lucky backpackers. Four decades on, the maze-like 17-room property has spiralled upmarket as an art-filled, fine-dining, celebrity hideaway gazing across the island-studded bay. You’ll like it (half-board doubles from £412; sabrinashaus.com).

By day six, I was suffering from aesthetic exhaustion. The mountains, the forests, the rivers, the pomegranate orchards, the ease with which humanity occupied the space and the constant views of that mesmerising blue had left me craving a restorative tour of a run-down industrial estate. No chance.

Turtle Beach is a two-and-a-half-mile curve of sand at the mouth of the Dalyan River. It has restaurants, showers, wheelchair access, a mosque and turtles, their eggs lying in hundreds of carefully protected nests. It’s Turkey’s most famous beach, but over the headland to the south lies secret Kargicak Bay. You can reach it in a rental car if you don’t mind a hairpin descent down a dirt track.

Bored by the Istanbul rat-race, Busra Hanim and Orcun Dundar rented the cove from the Forestry department to build a restaurant, organic farm and, from next year, safari-tent accommodation, and effectively they recreated paradise (kargicakbay.com). Busra teaches yoga and her friend Mehmet leads sea-kayaking trips to grottoes, hidden bays and otherwise inaccessible beaches. On one — a patch of white sand shaded by wild olive and carob trees — goat tracks led from the crags across the sand and into the sea, prompting the question: do goats surf?

I could have stayed a while — Orcun said it was 22C here last Christmas, but Taylan insisted we took a boat trip to another lost city. 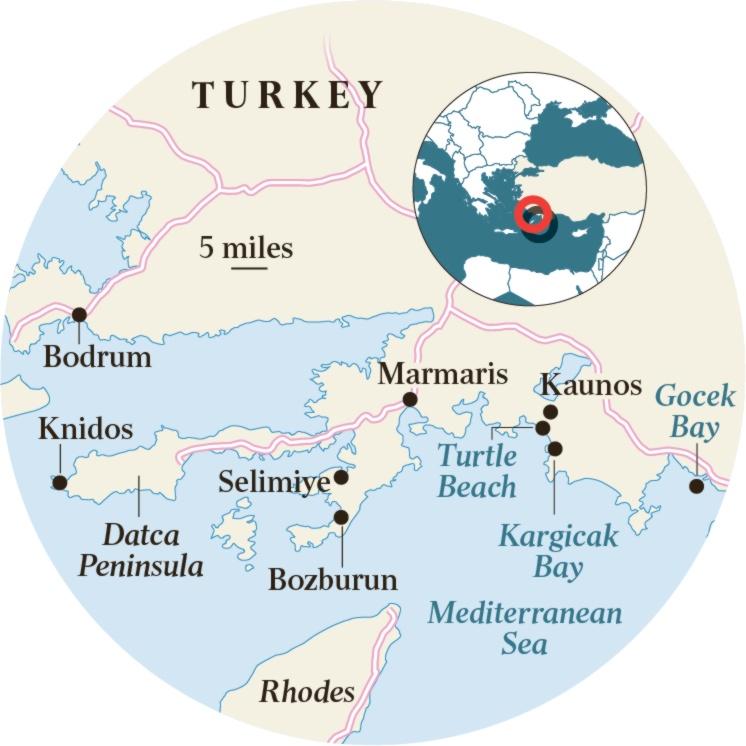 Kaunos stands on a bluff above a deep bay at what was then the mouth of the Dalyan River. It is believed it was founded in about the 8th century BC by local Carians, and occupied by Persians, Greeks and Romans before the bay silted up and trade declined. Earthquakes and malaria hastened its dereliction, but not before it had gained an amphitheatre, a bathhouse and Petra-like rock tombs and temples — one of which has this year been found to hide a remarkable secret.

If God throws a stone at you, I reckon you’ve got two options. You either run and hide, or you build a temple around it. The ancients of Kaunos, it seems, chose the latter. Recent excavations — unreported until now — discovered a hollow beneath an altar containing a powerfully magnetic iron meteorite.

On the walk back to the dock in the baking sun, we met Mohammed. His orchard bordered the lane, so he’d set up a table in the shade selling chilled pomegranate juice to passers-by. All of Turkey’s charm and hospitality were suddenly here. We were only chatting with a one-eyed bloke whose wife had thrown him out of the house to try to make a few lira from tourists, but it is moments like this — on a dusty track beneath a lost city far from the dehumanised apparatus of mass tourism — for which we travel.

Back on the Amazon Solo, we’re several rakis into a night streaked by shooting stars and Serhan has finally found the answer to my question.

“I’ll tell you why Greece gets all the love,” he says. “Films.” He counts on his fingers. “Zorba the Greek, Shirley Valentine, Captain Corelli’s Mandolin, Mamma Mia!. And Turkey?” He holds up just one finger. “Midnight Express.”

A ten-day private guided tour of the Turquoise Coast, travelling by land and sea from Bodrum to Fethiye, costs from £2,795pp, B&B . Chris Haslam was a guest of gototurkey.co.uk 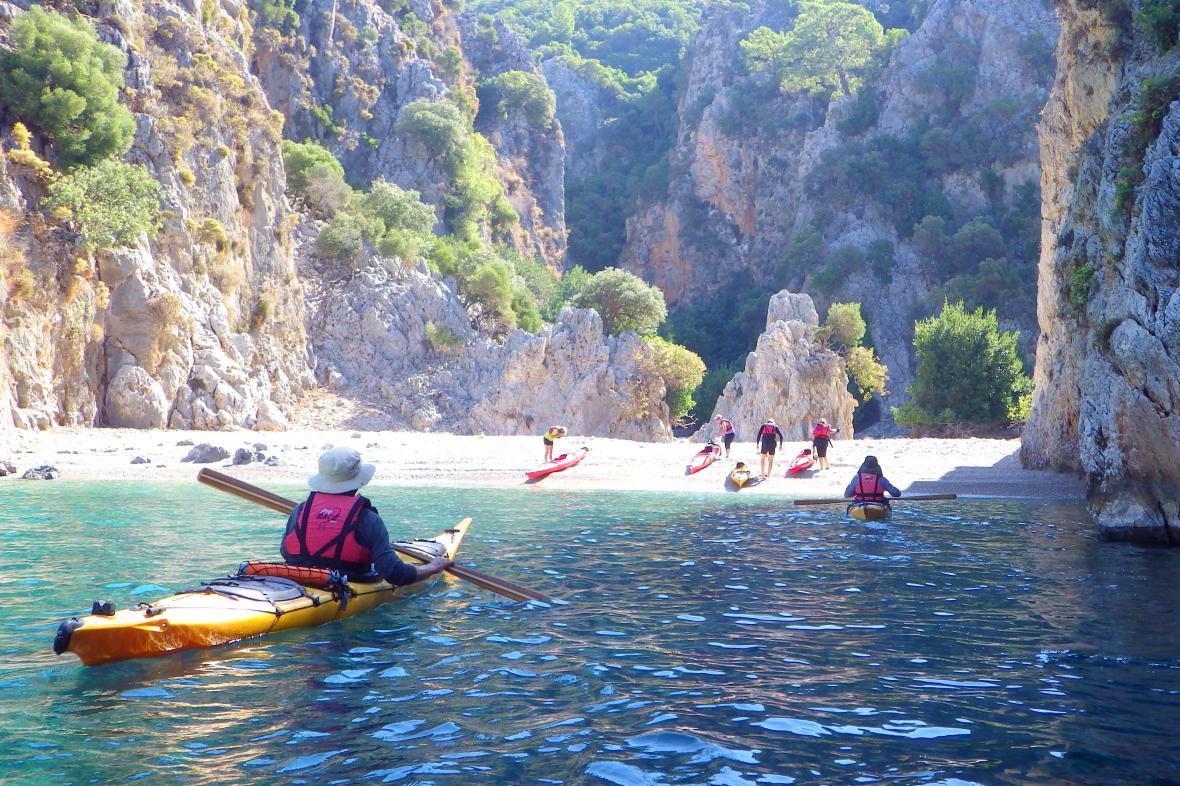 By kayak
Kayak guide Mehmet Cobanoglu offers a delightful week paddling the flat blue waters from Dalyan, following the shoreline to discover parts of the Turquoise Coast known only to loggerhead turtles. The best nights are spent camping on secret beaches, cooking over driftwood fires and drinking raki under the stars. Other nights are spent in shoreside hotels. The paddling requires a certain level of fitness, but is entirely suitable for novices, with training on offer as part of the trip. Kayaks, safety equipment and camping gear are provided.
Details
Seven nights from £355pp, B&B, plus some extra meals. Fly to Dalaman

By bike
On this eight-day tour by bike and boat, you’ll start in the pretty, riverside town of Dalyan, pedal the shore of Lake Koycegiz to the hot springs at Sultaniye and visit the ruins of Kaunos, before sailing from Gocek to Fethiye for a long descent through the orchards on the lower slopes of the Taurus Mountains to the Xanthos River. You’ll bike to Patara — the astonishingly well-preserved ancient city that was the winter home of Apollo and true birthplace of St Nicholas — before a final magnificent ride along the coast road to Kas.
Details
Eight days from £635pp, B&B, plus four other meals. Fly to Dalaman

By gulet
By far the most sophisticated way to explore the coast, a gulet comes with a crew and a cook and will sail wherever you like, usually drifting from bay to bay for shore hikes, beach time or swims, before anchoring in a bay overnight. It looks expensive, but offers terrific value if you can fill the berths.
Details
Five nights’ cruising on the Amazon Solo out of Gocek, sleeping 12 in six en suite cabins, from £1,145pp, all-inclusive. Fly to Dalaman